Abstract. This short note is devoted to the analysis of the trace of a product of two matrices in the case where one of them is the inverse of a given positive definite matrix while the other is nonnegative definite. In particular, a relation between the trace of A–1H and the values of diagonal elements of the original matrix A is analysed.

Traces of matrix products are of special interest and have a wide range of appli- cations in different fields of science such as economics, engineering, finance, hydro- logy and physics. They also arise naturally in the applications of mathematical sta- tistics, especially in regression analysis, [1-3] or the analysis of discrete-time statio- nary processes [4]. There are papers devoted to the role of matrix-product-traces in the description of the probability distributions of quadratic forms of random vectors, [1, 5], or to the development of approximate boundaries for their (i.e. product traces) values [6-11]. In some statistical applications the product under consideration involves inverse A–1 of a given positive definite matrix A. In particular, it takes place in the Bayesian analysis in regression modelling, where the matrix A can be interpreted as the covariance matrix of the disturbances and/or a priori distribution of unknown system-parameters [2, 3].

In this paper, we present an equation concerning traces of certain matrix products involving an inverse A–1 of a given matrix A, and next this equation is used to obtain a result relating the changes in the values of the diagonal elements of the original matrix A with the values of the considered trace. This note is organized as follows. In the next section we recall some definitions and facts that will be necessary to state and prove the new results. In Section 3, we state the main equation and then, in Section 4 we present some possible applications.

All of the matrices considered here are real. For any square matrix A = [aij]n´n the symbol

The following facts concerning determinants and/or inverses of matrices expressed in so-called block forms can be found in various textbooks, see e.g. [12, pp. 33-34].

Let A = [aij]k´k and x be a k-dimensional column vector. Then for any number a

Let A and B be symmetric matrices. The following equality is true, provided that the inverses that occur in this expression do exist

Let A be nonsingular and let u, v be two column vectors with dimensions equal to the order of A. Then

Definition (Hadamard Product). If A = [aij]n´m and B = [bij]n´m are the matrices of the same dimensions nxm, then their Hadamard product is the nxm - matrix А*В of elementwise products, i.e. А*В = [aij·bij]n´m

We have the following results involving Hadamard products.

For any square matrices A, B of the same order, the following equality holds:

with e being the vector of an appropriate dimension with all coefficients equal to unity, i.e. eT = (1,1,..,1).

where the constant d equals

Let A > 0 and H ³ 0. Let A11 and H11 be the submatrices obtained by deleting the first row and the first column in A and H, respectively. Then the matrix C given by (6) is positive definite, the constant d in (6) is a positive one, and

Now, by (2), the inverse of the block matrix takes on the form

It results from the Fact 3 that we have the following equality for lower-right block in (8):

Taking the formula (9) into account we can obtain new forms for the remaining three blocks in (8). The first one, in the upper left corner (as a matter of fact 1x1 matrix), takes on the following form:

The second block in the first row can be transformed in the following way:

Similarly the third one takes on the form:

Now the matrix A–1 can be expressed by the following simple formula:

Thus, for any matrix H of an appropriate dimension the following equalities hold:

Now we show that the number d is positive.

Indeed, in view of Fact 1 we have:

, so we finally have:

Since the matrix A is positive definite one, both above determinants are positive and this yields the positivity of d:

To complete the proof we need to show that the matrix C is positive definite one. For an arbitrary k-dimensional vector xT = (x1,x2T), x1ÎR, x2ÎRk–1 we have

This yields that for any nonzero vector xÎRk, xT C x > 0 and thus the matrix C is positive definite.

The proof of Proposition 1 is completed.

First we state a proposition which is a quite straightforward conclusion from Proposition 1.

Let the matrices A, H satisfy the assumptions from Proposition 1, and let, as previously indicated, symbols A11 and H11 denote the submatrices obtained by deleting the first row and the first column in A and H, respectively. Then

Let us consider now a symmetric positive definite matrix A = [aij]. Let us define a matrix Ax = [aij] related with A by the formula: a11 = a11 – f(x) and aij = aij for all remaining elements of A, where

, DÍR, is a given real function.

Let A > 0 and H ³ 0 be square matrices of the same order. Let f be a function differentiable on an interval D such that Ax > 0 for all xÎD. Let for all xÎD, a function

It follows from Proposition 1 that

While the matrix C and constant d are defined in (6).

Note that the function T depends on its argument only thru the function D. Now a little calculation shows that for each xÎInt(D) the derivative of T does exist and can be expressed in the following form:

In view of the assumptions about the matrices A and H and our previous results, the ratio

is nonnegative, which completes the proof.

Due the fact that in our results the matrix H is nonnegative definite, one may consider matrices of the form H = wwT, with w being a column vector. Because of the well-known relation wAwT = Tr(AwwT), it is easy to see that the above results can be also used for the analysis of the quadratic forms wAwT with A being a given symmetric positive definite matrix. 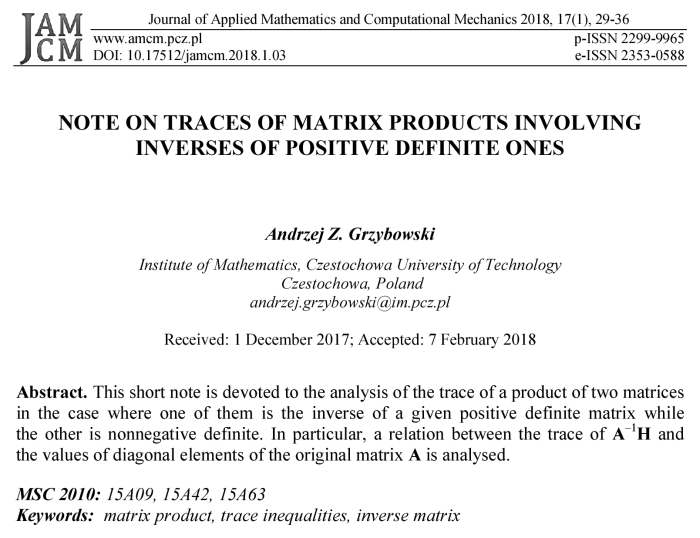