Abstract. In this article, we investigate the theoretical study of the magnetohy-drodynamic (MHD) non-orthogonal stagnation point flow of a nanofluid towards a stretching. The partial differential equations that model the problem are reduced to ordinary differential equations which are then solved analytically using the improved Spectral Homotopy Analysis Method (SHAM). Com­parisons of our results from SHAM and numerical solutions show that this method is a capable tool for solving this type of linear and nonlinear problems semi-analytically.

Most researchers have used the semi-analytical and numerical methods such as the Runge-Kutta methods [1], finite difference methods [2], finite element methods [3] and spectral methods [4] to solve this type of equations. In recent years, for solving nonlinear differential equations, several analytical and semi-analytical methods have been established such as the variational iteration method [5, 6], Adomian decomposition method [7], differential transform method [8], homotopy analysis method (HAM) [9-13], and the spectral-homotopy analysis (SHAM) [14, 15] and more recently, the successive linearization method [16, 17].

All analytical and semi-analytical methods mostly focus on the single and independent linear and nonlinear equations of the boundary layer flow problems. In this paper, we present an improved spectral-homotopy analysis method to solve the system of boundary layer problems. The considered system contains the nonlinear boundary differential equations governed from partial differential equations of magnetohydrodynamic (MHD) non-orthogonal stagnation point flow of a nanofluid towards a stretching.

2. Formulation of the problem

We investigate the steady two-dimensional stagnation point flow of a second grade nanofluid over a stretching surface [18, 19]. Two equal and opposite forces are applied along the z-axis so that the surface is stretched keeping the origin fixed, as shown in Figure 1. We further assume that the surface has temperature

and the fluid has uniform ambient temperature

). The flow is subjected to the combined effect of thermal radiation and a transverse magnetic field of strength

, which is assumed to be applied in the positive

direction, normal to the surface. The induced magnetic field is also assumed negligible compared to the applied magnetic field, so it can be neglected. It is further assumed that the base fluid and the suspended nanoparticles are in thermal equilibrium. It is chosen that the coordinate system

-axis is along the stretching sheet and

-axis is normal to the sheet. Under the above assumptions, the governing equation of the conservation of mass, momentum, energy and nanoparticles fraction in the presence of a magnetic field and thermal radiation past a stretching sheet can be expressed as,

are the velocity components in the x and y directions.

and k are the local temperature of the fluid, nano-particle fraction, kinematic viscosity, density, electrical conductivity, and permeability of the saturated porous medium parameters, respectively.

is the thermal diffusivity,

is a function of temperature and concentration, which complicates the description of thermophoresis and

is the density of nano- fluid at constant pressure. The boundary conditions are,

, are positive constants with the dimension of (time)–1 indicating potential flow and linear shear flow parallel to the streamwise direction (shear stress

in governing boundary layer equation of energy is approximated by Rosseland approximation, which gives,

can be expressed as a linear function of

. This can be obtained by expanding

in a Taylor series about

. Heat is transferred by forced convection, which involves the only normal component of flow field. Introducing the following dimensionless quantities, the mathematical analysis of the problem is simplified by using similarity transformations.

According to the presented similarity transformations as shown in [18, 19], the above systems can be converted to the following ordinary differential equations along with the corresponding boundary conditions,

and subject to the boundary conditions,

are positive constants and

is the magnetic number,

is the Prandtl number,

is the Lewis number. 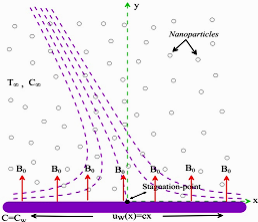 At the beginning, for transferring the domain of the problem from

, the domain truncation method has been utilized. The computational domain

is a fixed length can be used to approximate the domain

is taken to be larger than the thickness of the boundary layer [15]. The simple algebraic mapping for transferring the interval

to the Chebyshev domain

For convenience, the boundary conditions have been made homogeneous by applying the trans­formations as,

are chosen so as to satisfy the boundary conditions (6) and (7) as,

with the boundary conditions,

and here are the coefficients

By solving the linear parts of Eqs. (2) up to (5), we can obtain the initial solutions,

The Chebyshev pseudo-spectral method has been used to solve Eqs. (16) up to (19). The unknown functions

are aproximated as truncated series of Chebyshev polynomials as follows,

are the Chebyshev polynomials with coefficients

are Gauss-Lobatto collocation points defined as,

Derivatives of the functions

at the collocations points are defined as,

is the order of differentiation and

is the Chebyshev spectral differential matrix with the entries as,

is defined as follows,

The superscript T denotes the transpose, “diag” is a diagonal matrix and I is an identity matrix of size

are obtained from the equation,

is the initial approximation for the solution of Eqs. (11)-(14) by the SHPM. The 0-th order deformation equations are given by,

here H is the nonzero convergence controlling auxiliary parameter; L and N are linear and nonlinear operators, respectively, defined as,

-th order deformation equations are given by,

subject to the boundary conditions: 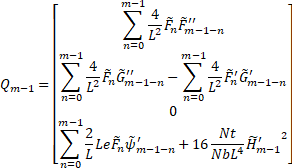 have corresponding rows and all columns equal to zero. This recursive formula when

, can be written as follows,

has been obtained by starting from the initial approximation.

4. Optimization of convergence-control parameters based on the square residual errors

From Eqs. (27), error functions can be defined as follows:

In what follows, we are going to find the optimal values of

, by using the convergence-control for various values of order

will find. The square residual error (SRE) method can help us to optimize the convergence-control parameters as follows:

th-order SHAM approximations of the functions

then we will have

that correspond to convergent series solutions of SHAM. The points at which the gradient of square residual error functions presented in Eqs. (32) and (33) with respect to convergence-control parameters vanish, are precisely the optimal values of

and the optimal square residual errors in the

. This figure shows that the optimal values of

is approximately between –1 and –0.4. By choosing

from this optimal interval, the results obtained from SHAM will have good accuracy. Table 1 presents the optimal values of

. Table 1 is showing that with increasing the order of approximation

, the square residual error will decrease. To obtain the results of Table 1, Matlab R2015b software has been used.

Figures 3, 5 and 7 present the influence of

and, temperature and concen­- tration profiles when

. As shown, by decreasing the values of

appeared in the initial conditions

is decreasing and both temperature and concentration profiles

are increasing. The results indicate that the curves reduce with a negative slope for

. Figure 3 is showing that with decreasing the striking angle

at a fixed value of

, heat transfer velocity will decrease. Figure 5 indicates that with decreasing the striking angle at a fixed value of

, temperature will increase. Figure 7 is showing that with decreasing the striking angle at a fixed value of

Figures 4, 6 and 8 are showing the influence of

and, temperature and concentration profiles when

. Note that, by increasing the values of

appeared in the initial condition

is increasing and both temperature and concentration profiles

are decreasing. Figures 4 indicate, however, that they have positive slopes for

, and the curves reduce with a negative slope for

. Figure 4 is showing that with increasing the velocity parameter

at a fixed value of

, heat transfer velocity will increase. Figure 6 indicates that with increasing the velocity parameter at a fixed value of

, temperature will increase. Figure 8 is showing that with increasing the velocity parameter at a fixed value of

In order to test the accuracy of the present results, we have compared the results for skin friction coefficient

with those reported by Lok et al. [20]. This comparison is presented in Table 2. It is noticed that this comparison shows an excellent agreement, so that we are confident that the present results are accurate. Table 2 shows a comparison of the re­sults

. Results of this table indicate that with increasing parameter

is increasing with a high speed. To obtain the results of Table 2, Matlab R2015b software has been used.

Comparison of the results for

We have investigated the modified spectral homotopy analysis method (SHAM) for solving a complicated nonlinear dynamical system in the MHD non-orthogonal stagnation point flow of a nanofluid towards a stretching. Numerical results show the effectiveness of our proposed method for solving complicated linear and non-linear dynamical systems in the heat transfer and heat flow problems. The results indicate that they have positive slopes for

, and the curves reduce with a negative slope for

. The optimal interval for

is between –1 and –0.4. The results for skin friction coefficient

from our presented method with

have been compared with those reported by Lok et al. at references [20]. This comparison shows an excellent agreement, so that we are confident that the present results are accurate.