Abstract. In the paper, we investigate multi-server queueing systems with demands of random space requirements (volumes), in which buffer space is limited by constant value and queueing ore (and) service time are limited by exponentially distributed random variables. For such systems, stationary demands number distribution and loss probability are determined. Some numerical results are attached as well.

Queueing systems with demands of a random space requirement (or random volume) [1, 2] are the generalization of the classical queueing models [3, 4]. They can be used to model and solve various practical problems in the design of computer and communication systems (see e.g. [1, 2, 5]). In particular, such models can be applied to buffer space volume determination in the nodes of computer and communication networks. The main proposition of the theory of such systems [1] is the heterogeneity of demands served by the system with respect to their random volumes, in other words, we propose that different demands need different memory size (volume) during their presence in the system.

In the paper, we investigate queueing systems in which demands are also “impatient”, i.e. they can leave the system during their waiting in the queue or (and) during their servicing. In the classical queueing theory (for demands without random volume), systems with times limitations were investigated e.g. in [4, 6]. In particular, in [6] queueing systems with random limitations of queueing and (or) service time were investigated. In the paper [7], the system with random volume demands, deterministically limited total demands volume and deterministically limited queueing or sojourn time were analyzed.

In this paper, we investigate a similar system, but the difference is that, in the system under consideration, queueing and (or) service time are limited by exponen- tially distributed random variables. For example, we have a situation when a demand contains some information that can be grown old fore random reasons, and therefore it must be eliminated from the system.

The paper is organized as follows: In the Section 2, we give the mathematical description of the model and introduce some necessary notations. In Section 3, we introduce the functions describing the system behavior and define an appropriate Markov process. In Section 4, we build a system of differential equations for the function introduced in Section 3 and give its steady-state solution, from which the steady-state demands number distribution is determined. In Section 5, we determine the loss probability for the system under consideration. Section 6 contains examples of numerical results illustrating theoretical formulas, and the last Section 7 presents conclusions and final remarks.

We consider a queueing system of M/M/n/m

-type, in which all demands are characterized by some random volume (or space requirement)

is a non-negative random variable that doesn’t depend on the volumes of other demands and the epoch of the demand’s entering to the system. Denote by

the distribution function of the random variable

be the total demands volume or the sum of all volumes of demands present in the system at time instant t. The values of the random process

are bounded by the con- stant value V (

be the number of demands present in the system at time instant t.

other demands in it and

and the demand is accepted to the system. In opposite case (

), the demand will be lost without influence to future system behavior. In this case, we have

The arriving demand will be lost also if there are

other demands at the epoch t.

Demands accepting to the system are served in accordance to FIFO discipline. But their queueing time and (or) sojourn time are limited by some random variables having an exponential distributions with parameters

respectively, i.e. demands can leave the system (be lost) during waiting in the queue or servic- ing. In particular, if only queueing time is limited in the system, we have

if only service time is limited, we have

and if sojourn time is limited in the system, we obtain

Let a be the parameter of demands enter flow,

Our aim is the determination of the steady-state distribution of number of demands present in the system and the demand loss probability.

is the volume of the j-th demand presenting in the system at time instant t. It is clear that

The process (1) we shall characterize by the functions having the following probability sense:

It is clear that, for

4. Steady-state distribution of demands present in the system

It can be easily shown that the functions (2)-(4) satisfy the following Kolmogorov-type equations (see also [8] for comparison):

Assume that at least one of the values m and V is finite. Then, we have obviously that

in the sense of a weak convergence, where the random variables

are the steady-state number of demands present in the system and their total volume, consequently. So, the following finite limits exist:

It follows from the equations (5)-(9) that the steady-state characteristics (10) and (11) satisfy the following equations:

Then, by direct substitution, we can easily show that the solution of the Eqs. (12)-(16) has the form:

We have from the relations (17) that

can be determined from the normalization condition

Let A be the event that an arbitrary arriving demand is accepted to the system and served completely and K be the mean number of busy servers in steady state. We have evidently that

and we obtain for probability of the event A:

Then, the probability that an arbitrary demand is lost at its arriving epoch or is not served completely can be determined as

In this section, we present numerical examples illustrating theoretical results. More precisely, we present how the loss probability

depends on the buffer capacity V and the parameters

and service time has an exponential distribution with parameter

Consider three cases of the considered system when 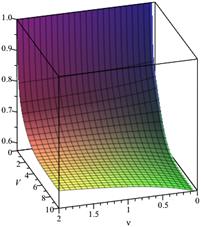 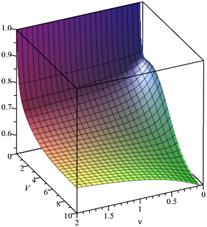 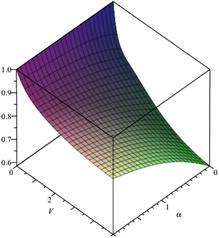 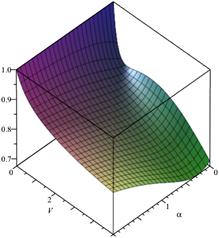 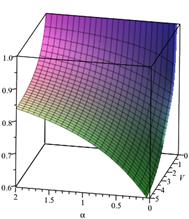 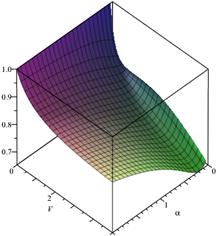 Assume that the system buffer capacity V takes the values from 0 to 10, and the parameter

takes the values from 0 to 2. Furthermore, when

. For example, if there is one waiting place in the queue (

In the second case, only service time is limited (Figs. 3 and 4), then we have

Assume that the system buffer capacity V takes the values from 0 to 5, and the parameter

takes the values from 0 to 2. Furthermore, when

and V = 1, the loss probability

In the third case, the sojourn time of demand in the system is limited, then we assume

takes values from 0 to 2. In addition, when

. For example, if there is one waiting place in the queue (

In the paper, we consider a multiline queueing system with random time limitations and limited buffer space. The determination of the steady-state distribution of number of demands present in the system and the demand loss probability are presented. Some special cases of the system under consideration are provided with numerical calculations in Maple. In any case, when the number of waiting places increases, of course the loss probability of demand also increases. This model shows the loss probability of demand (see Figs. 1-6). The results obtained in the paper can be used for estimating of total demands volume characteristics in the nodes of computer and telecommunication networks.

[5] Naumov, V.A., & Samouylov, K.E. (2016). On relationship between queueing systems with resources and Erlang networks. Informatics and Applications (Informatika i ee Primeneniya), 10, 3, 9-14 (in Russian).