Abstract. The work studied the reflectance for quasi one-dimensional phononical structures. In composite superlattices, the thickness of the layers, their arrangement and selection of constituent materials with appropriate properties such as the density and velocity of mechanical waves propagation allows for the creation of a phononic band gap (PhBG) phenomenon. PhBG is characterized by high reflectance of the mechanical wave incident on the analyzed structure, which means that the wave does not propagate in the superlattice. The paper proposes periodic and aperiodic structures characterized by a wide range of reflectance for the ultrasonic frequencies of mechanical waves and shows how the change the thickness of the layer affects the properties of the analyzed structures.

Among composite materials, it is possible to create structures in which waves with given frequencies will not propagate. These structures can be one (1D), two (2D) and three-dimensional (3D) [1]. The phenomenon of no propagation of waves at given frequencies is called the occurrence of a phononic band gap [2].

The design in the 1-D of the multilayer structure in order to obtain a band gap can be achieved by changing the phononic superlattice geometry. A similar effect is obtained by changing the elastic characteristics of constitutive materials using external stimulation [3].

Phononic crystals show in their band structures frequency ranges forbidden to propagate elastic waves. These crystals, characterized by a phononic band gap occurrence, have many practical applications. They can be used to build sound shields and filters [4], acoustic focusing of sound [5] or acoustic interferometers [6]. In addition, phononic crystals found application in the construction of selective frequency waveguides [7] or for the construction of an acoustic diode [8].

In this work, the Transfer Matrix Method algorithm (TMM) was used for the determination of the reflectance coefficient for elastic waves propagation in a phononic crystal. The TMM algorithm was used in the work [9] to obtain the transmission coefficient for the quasi one-dimensional Severin aperiodic multilayer. This method was also used in [10] to analyze the occurrence of characteristic peaks in phononic multilayer structures.

The paper proposes structures characterized by a wide range of reflectance for the ultrasonic frequencies of mechanical waves and shows how the change in material parameters affects the properties of the analyzed structures. The existence of reflectance bands with full wave reflection for these structures was presented.

is pressure of incident mechanical wave,

In the multilayer structure, the transition between the layers is described by matrix Φi,i+1 and propagation matrix matrix Γi, corresponding to the i-layer with thickness di, which is given by

The wave vector is determined by

and the acoustic impedance i-layer is defined as

The tests were carried out for three types of structures: periodic - binary, quasi periodic - Thue-Morse and aperiodic - Severin. Their characteristics including: type, initial conditions and creation rules were presented in Table 1.

The distribution of layers (A, B) into individual structures for the L (2-5) generations number were collected in Table 2.

Table 2. Arrangement of the layers of structures for L generations number

The material of the layers consisted respectively of: A - Epoxy and B - Glass. The material properties of the structure layers have been shown in Table 3. On the basis of numerical calculations, reflection coefficients in the frequency range (0¸1000 kHz) were obtained for the considered structures. Reflectance (R) maps for different types of structures in which the thickness of layer B (dB) was increased from the determined base value to three times its value were presented in Figures 1-3.

Table 3. Material parameters of the components of the multilayer structure [12, 13] 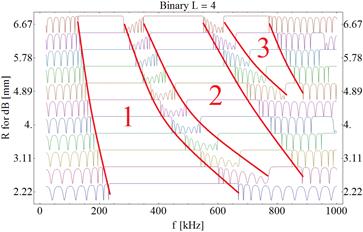 Fig. 1. Reflectance maps for a Binary structure in which the thickness of layer B was increased. High reflectance bands are marked 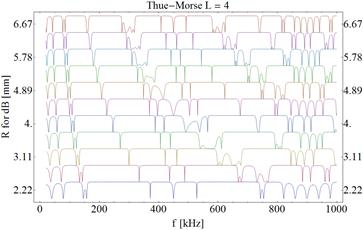 Fig. 2. Reflectance maps for a Thue-Morse structure in which the thickness of layer B was increased 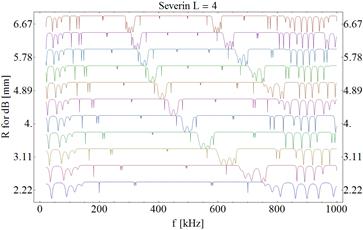 Fig. 3. Reflectance maps for a Severin structure in which the thickness of layer B was increased

Further graphs of reflectance for each thickness of the layer B is shifted by the full transmission. In each of the three analyzed cases, high reflectance bands can be distinguished. In the first band (Fig. 1), as the layer thickness B (dB) increases, its width decreases and moves towards the lower frequencies. The offset is also noticeable for the other two bands. However, there was no clear relationship between the thickness of the B layer and the width of individual bands. For the base value of the thickness of layer B, the band 2 does not occur. Three bands are also visible in Thue-Morse (Fig. 2) and Severin (Fig. 3) structures, but they are wider than in the binary structure and are intersected by high transmission peaks.

In the work, the reflectance coefficient was investigated for three types of structures with the same number of layers. The structures were respectively: periodic - binary, quasi periodic - Thue-Morse, aperiodic - Severin. The existence of reflectance bands with full wave reflection has been shown. As the thickness of the B layer increased, the reflectance band thicknesses declined (only at first band) and they moved towards the lower frequencies (all bands). Unlike the other structures, there were no transmission peaks inside the reflectance bands in the binary superlattice. In particular, the Thue-Morse structure can be used as a selective filter due to the high transmission peaks inside the bandgaps. A change of one of the materials for the piezoelectric layers would, to some extent, control the positions of the voltage peaks.